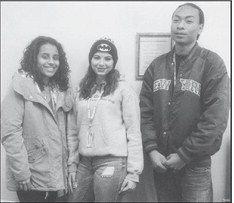 Lowell Middlesex Academy Charter School gives many students from Lowell and beyond a second chance, including, from left, Areli Santiago Campos, 20, Hayleigh McLaughlin, 17, and Daryn Man, 19, all of Lowell.

LOWELL — Areli Santiago Campos dropped out of high school her junior year when she became pregnant.

Daryn Man was out of school for three years.

Hayleigh McLaughlin was discouraged by large class sizes and felt like school just wasn’t for her.

All have found their second chance at Lowell Middlesex Academy Charter School.

Campos, now a 20-year-old mother of two young children, wants to be a social worker. Man expects to graduate next June and is about to start an internship at an automotive business. McLaughlin wants to study psychology and become a counselor.

Overshadowed by a controversial ballot question that sought to expand charter schools statewide, schools like Lowell Middlesex Academy Charter School hold special importance for a set of students who may have felt lost in more traditional school environments.

“The school does not ask students to apologize for past school failures,” LMAC says on its website. “But we do hold them to high standards.”

Students like the fact that the Middle Street school is nontraditional. Classrooms aren’t organized as they might be at a typical high school, and class and hallway walls are painted in bright colors. There are no lockers. It can feel more like showing up for work than school.

For students who often have to overcome distractions at home, it works.

“This is a very good school for me,” said McLaughlin, a 17-year-old Lowell resident. “The teachers and staff care for me a lot.”

McLaughlin said she has always struggled with math, and was surprised to find success with Daroth Yann, a Middlesex Academy math teacher.

“It’s that relief of, ‘I never knew I could do that,'” McLaughlin said.

Yann is a Middlesex Academy graduate, and was drawn there from her last job at a middle school.

“I think it’s just so rewarding to see that much of a difference,” said Yann, in her ninth year at the school. “You see a difference in so many aspects of their life.”

Man, a 19-year-old Lynn native, was out of school for three years before giving it a second shot. He said his grandfather had always encouraged him in school when he was younger. But after his grandfather died, his will to go to school disappeared. In his first two semesters at Middlesex Academy, though, he never missed a day.

“Finally, I realized that without education, there’s nothing else to be in life,” he said.

Campos, who has a 6-month-old and a 20-month-old at home, said she’s fortunate to have her mother and sister to help with child care. It always remained in the back of her mind that she wanted to go back to school, she said.

Any Massachusetts student may apply, though Lowell teens have priority and make up the bulk of the 100-plus students. In recent years, students have come from Billerica, Chelmsford, Dracut, Lawrence, Methuen, Tewksbury, Tyngsboro and Westford. Students ages 16 and 21 are accepted in August, November and March.

Staff and students often refer to the school as a family, and Middlesex Academy’s size allows for that. The staff is small enough to eat lunch together every day. The student body is small enough to squeeze into a yearly photo, and each year’s is displayed, poster-size, in a hallway.

For camaraderie and team-building, the students go to Camp Massapoag in Dunstable each September and May, and climb Wachusett Mountain each October.

A 2008 graduate, Raphael Mendez, returned to the school last week to visit, and credited efforts like those — or when he and classmates were once taken to City Hall to register to vote — for how the school worked for him. He’s now a Billerica police officer, after having had once dropped out of Lowell High School after one semester.

“They get to know you more,” he said of Middlesex Academy’s staff. “They just made it so easy to show up every day.”

Lowell Middlesex Academy was one of the state’s first charter schools, established in 1995.

The school requires a school-to-work component, which totals 50 hours during a school year in a job field that interests each student. It holds daily advising sessions for students and offers a dual-enrollment program with Middlesex Community College.

Just over half of Middlesex Academy students are from low-income families, according to state education records, doubling the state average and illustrating the challenge many face outside of school. Nearly six in 10 graduates in the class of 2015 went on to two-year colleges, typically MCC. An equal rate of students — 12 percent each — went to four-year colleges or entered the workforce.

There are only several others like Lowell Middlesex Academy in Massachusetts, including Phoenix Charter Academy, which has schools in Chelsea and Springfield, both slightly larger than Lowell’s. Last school year, every graduate from both schools was accepted into a postsecondary education program, according to Phoenix.

Due to the impending snow, LMACS will have an early dismissal on Wednesday, Jan 25, 2023.  Students will be dismissed at 1:30.